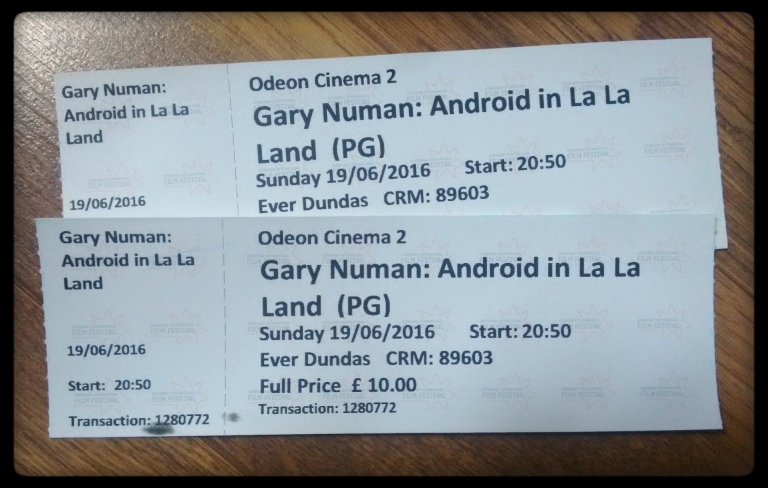 I had the pleasure of attending the European premiere of Gary Numan: Android In La La Land at the Edinburgh International Film Festival last night.

I’ve been a Numan fan for many years (I’d like to say I was so cool I was there from the beginning but I was born the year of Replicas and I was probably more punk than synthpop, what with the dribbling and the vomming). I first discovered Numan when I frequented a goth/punk/industrial club as a teen, instantly falling in love with Are Friends Electric? and Cars. It was a pleasure witnessing the influence he had on many of the bands I loved, including NIN, and for them in turn to influence him as he moved down a more industrial route. I went to see him live a few times in the 00’s and loved every moment; he has such fantastic stage presence.

Before I saw the documentary I wasn’t aware how much the press unfairly pilloried him early in his career. I can only be thankful it didn’t destroy him and that he had the focus, ambition, and support from his wife and parents to keep going.

I was aware of his Asperger’s and his struggle with depression, so I thought the documentary might be a bit grim, but while there are moving and sometimes heartbreaking moments, it was often very funny; there were numerous times where I laughed out loud (my favourite scene being the serial killer chat between Gary and his wife Gemma). Also, this has to be said – I badly want a kitsch mansion with gargoyles and secret stairways (possibly maybe a childhood dream… one day, right?)

I’m a Numan fan, so it’s hard to be completely objective, but like any good documentary I don’t think you need to be a fan to appreciate it; as the directors said during the Q&A, it happens to be about a very talented musician but at heart it’s a love story. It’s also about Asperger’s and mental health and it’s a powerful thing to have a man talk so honestly about his struggles when there’s still such damaging stigma about men being openly emotional and admitting when they’re not coping.
While it can be interesting to get some insight into the working process of a songwriter, as a non-musician I lose interest if it goes on for long or gets too involved. Fortunately, this documentary didn’t indulge in this and the detail it did go into I found fascinating, particularly when Numan described the way he fits the lyrics in with the music.

As a number of Numanoids pointed out in the Q&A after the screening – it was about time; they’d been waiting decades for this, a documentary that does justice to this brilliant trailblazer. For all you creatures still desperate to see it, it goes on general release in the UK in August.

Sadly, Numan’s mum died on June 7th. His dad has requested donations to cancer charities including Macmillan, a charity that supported my own family when my sister died in 2013.