Happy Halloween, Creatures! I hope you all have a hideously spooky time. To mark the day, here’s my piece about Anthony Horowitz’s Groosham Grange. Be warned – there’s spoilers. 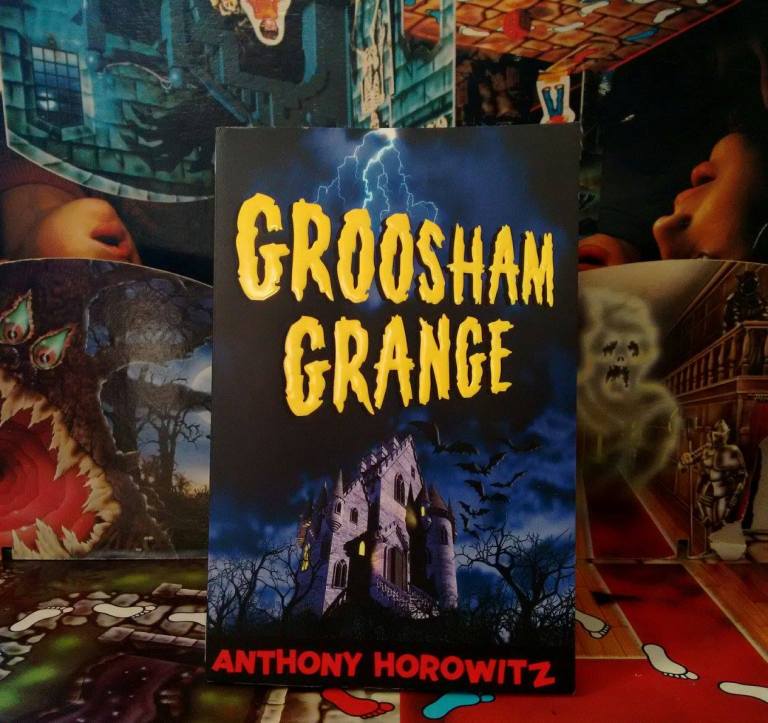 When I first read Groosham Grange it blew my nine-year-old mind.

Groosham Grange follows three misfits, David, Jill, and Jeffrey as they arrive at their new boarding school on Skrull Island where they are forced to sign a book in their own blood; the teachers seem to be werewolves, vampires, and witches; and all the other pupils are oddly well behaved, wear the same mysterious ring, and disappear at night. It turns out the children all have one thing in common – they are the seventh son of the seventh son (or in Jill’s case, seventh daughter) and on their thirteenth birthday they will have to choose between joining the school or death. All these spooky ingredients added up to a delicious and tense read for my child-self and I devoured it.

Reading it as an adult I’m irked by some of the bad puns and anti-vegetarian sentiments (although, I get what Horowitz was doing – what kid wants to eat their vegetables? So here’s that mealtime torture taken one step further), but I still love the mischievous dark humour that lampoons ‘normal’ family life and (in what now seems like prescience) bankers. Some of this dark humour is pretty close to the bone, with depictions of domestic violence and child abuse; it’s a deft hand that can pull this off and Horowitz does this with aplomb (à la Roald Dahl – another childhood favourite), turning it into an almost Grand Guignol over-the-top satire on modern living.

While the murders that were deemed ‘necessary’ for the continued existence of the school sit uneasily in my adult mind, it’s clear they were plot devices for ramping up the tension. This adds to the sense of peril when David escapes to a coastal town and discovers he’s been followed. It’s genuinely creepy when he hides in a funfair ghost train, his cart floating off the rails, Groosham Grange staff looming through the darkness as he’s led straight back to the island and the school; there is no escape. I clearly remember these words at the end of the chapter sending a shiver of unease through my child-self: “The ghost train had carried him back to Skrull Island. It was the evening of his thirteenth birthday and the darkness of the night was closing in.” Everything about this book is heightened – including the ‘choice’ of taking a blade to the heart or accepting the ring and joining the school. But this moral dubiousness is what made the ending even more interesting for me as a child – it wasn’t all black and white, it wasn’t ‘hero saves the day’; it was murky, it was complicated.

Ever since I learned to read my ambition was to be an author, and Groosham Grange is one of those early inspirations. Seeds of what now form the backbone of my writing (Queer Theory, problematizing the normal, defamiliarisation) can all be found in Groosham Grange, I just didn’t have the poncey academic words back then. This book gave me rebellion – parents and other adults aren’t always right; question authority, question what is considered ‘normal’. Horowitz nicely demonstrates the age-gap (or in this case, the age-yawning-void) perpetuated by the central characters’ parents, who impose their values, ideals, and dreams on the next generation without finding out what their children actually want. David apathetically puts up with family life at Wiernotta Mews, but rebels at Groosham Grange, fighting for what he thinks is his life and soul; but his soul was in danger of being lost long before then. It wasn’t the ghosts, ghouls and vampires he should have been scared of – it was the bankers, the priests, the middle-aged married couples.

What I’d been taught was bad wasn’t necessarily bad. The people I thought were bad – were they really? The things I was told to be afraid of – were they really the things to fear? As the headmasters explain to David: “All right, I admit it. We are, frankly, evil. But what’s so bad about being evil? We’ve never dropped an atom bomb on anyone. We’ve never polluted the environment or experimented on animals or cut back on National Health spending.” Beware the bankers, beware the politicians – don’t get distracted by those they call monstrous, don’t get distracted by their scapegoats.

David didn’t fit in. But he found his freedom and his people. And one day I’d find mine.