“If I lose the light of the sun, I will write by candlelight, moonlight, no light. If I lose paper and ink, I will write in blood on forgotten walls. I will write always. I will capture nights all over the world and bring them to you.”
– Henry Rollins 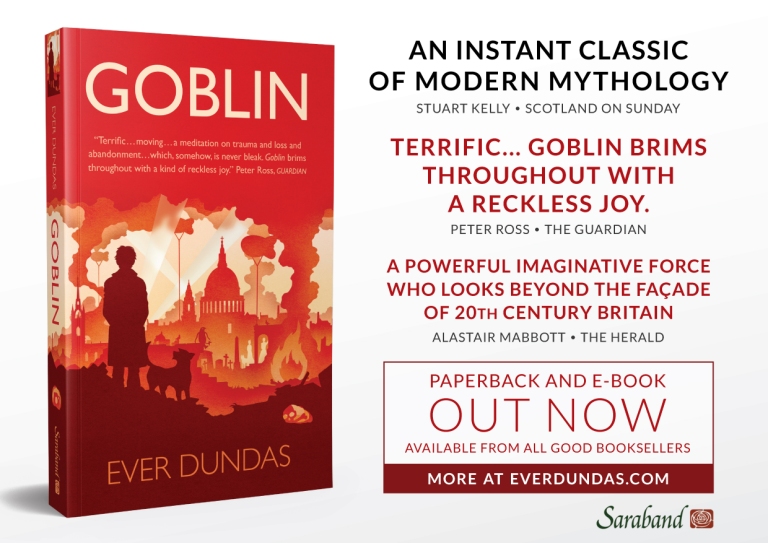 Described as Ian McEwan’s Atonement meets Guillermo del Toro’s Pan’s Labyrinth, my debut novel, Goblin (winner of the Saltire First Book Award 2017), was first published by Freight in May 2017 and was re-released by Saraband in December 2017.

Goblin is an oddball and an outcast. But she’s also a dreamer, a bewitching raconteur, a tomboy adventurer whose spirit can never be crushed. Running feral in World War II London, Goblin witnesses the carnage of the Blitz and sees things that can never be unseen, but can be suppressed. She finds comfort in her beloved animal companions and lives on her wits, exploring a fantastical world of Lizard Kings and Martians and joining the circus.
In 2011, London is burning once again, and an elderly Goblin reluctantly returns to the city. Amidst the chaos of the riots, she must dig up the events of her childhood in search of a harrowing truth. But where lies truth after a lifetime of finding solace in an extraordinary imagination, where the distinction between illusion and reality has possibly been lost forever?

I’m a writer specialising in the weird and macabre, with Queer Theory (problematizing the ‘normal’) forming the backbone of my work. I write literary fiction, sci-fi, horror, and fantasy. I gained a Creative Writing Masters with Distinction from Edinburgh Napier University in 2011, and I have a First Class Degree in Psychology and Sociology from Queen Margaret University. I have had several short stories published and my work has been shortlisted for awards. I recently completed my second novel, HellSans, a science fiction thriller.

I am represented by Jenny Brown.

I do collage and photography, which you can find here: Stillicidious Stars.

Sanctuary in Imagine A Country, published by Canongate March 2020
What Is To Come in The Freedom Papers, published by Gutter for EIBF, August 2018
Self-Harm Triptych in ‘Power’, 404 Ink, Dec 2017
Frankenstein’s Children: Here Be Monsters And They Are Glorious, TQU, 31 Oct 2017
Ode to Charles Burns and Emil Ferris, The Unsung Letter, 18 Oct 2017
The Place of Strange New Things, my ode to libraries for Edinburgh City of Literature, July 2017
The Problems with Gender and Language, The Skinny, 28 April 2017
The Bisexual Visibility Experiment, Dec 2015
Choke – The Undertow, May 2016
I Still Believe In My Childhood Dreams, Scottish Book Trust – ‘Journeys’, 2015
Shirley Jackson’s The Witch, Thresholds Short Story Forum, Oct 2014
Thievery – a piece about the inspiration for my short story The Cake Tree, Mar 2014
Heart Is Where The Home Is, Scottish Book Trust – ‘Home’, 2014
Heart In A Box, Scottish Book Trust – ‘Treasures’, 2013
Dreaming St Conan’s Kirk, Scottish Book Trust – ‘My Favourite Place’, 2012
I was a freelance book reviewer for The List. You can read my reviews here.
The Arts Journal – freelance Edinburgh International Book Festival 2012 event reviews.
Lick My Words: Angela Carter’s The Erl King – shortlisted for the Thresholds International Feature Writing Competition 2012
Gregg Araki – shortlisted for the Women on Film Sight and Sound competition 2011