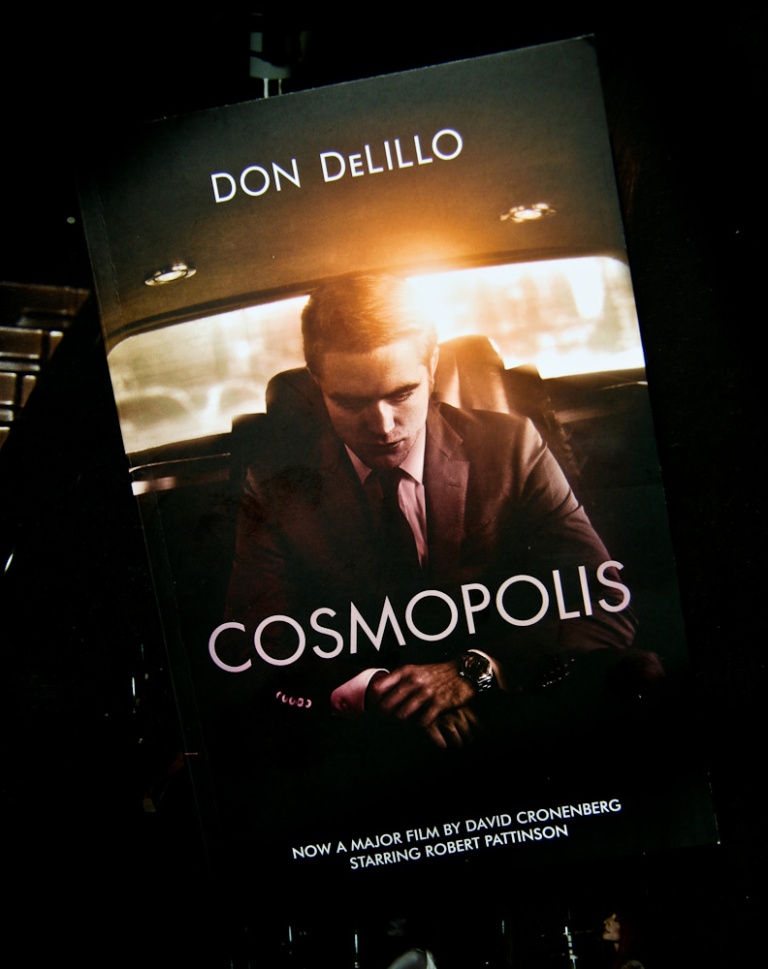 After immersing myself in the wonderful prose and brilliantly perverse dialogue of Cosmopolis I’m convinced my reading and writing life will be clearly demarcated as pre-DeLillo and post-DeLillo.

Packer, an asset manager billionaire living in Manhattan, crawls through the gridlocked streets in his white sound-proofed technology-laden stretch-limo. He’s going to get a haircut at his childhood barbers, and on the way he has various encounters. His interactions with other characters can hardly even be called that; it is as if there’s a glass wall between them, as if they’re talking to and for themselves and not with anyone else. It’s also a coded, insular, language – the language of capitalism, that of big business and bankers. The dialogue comes in short bursts, precise sentences that almost seem cut off, as if the remaining words were edited out. I’m convinced DeLillo had a dominatrix standing over him to hand out full stops and a whipping whenever dialogue got much beyond five words. The stylised speech has a Pinteresque feel, but Pinter if he was Brett Easton Ellis and JG Ballard’s lovechild. The stylised dialogue makes it difficult for the reader to engage and empathise. But that’s the point. Packer says to his wife: “We’re like people talking. Isn’t this how they talk?”

Published in 2003, DeLillo could be considered prescient in the way Cosmopolis prefigures the current financial crisis, the Occupy movement, and the way people connect to the events. Packer has been watching an Occupy-style protest from the limo’s sunroof, but it doesn’t seem real to him: “There were people approaching the car. Who were they? They were protestors, anarchists, whoever they were, a form of street theatre.” He retreats back into the car, and despite being in the middle of it, he is cut off from it. He can’t make sense of what is happening until TV tells him what he’s witnessing: “They watched, trusting what they say. It was a protest alright.” As the protest unfolds, Kinski tells Packer: “This is a protest against the future. They want to hold off the future.” Kinski claims that capitalism is so total that everything is assimilated, that nothing can take place outside of the market: “A spectre is haunting the world – the spectre of capitalism.” DeLillo highlights the abstraction and absurdity of the market, as Kinski explains to Packer that “Money has lost its narrative quality…Money is talking to itself,” and in Packer’s exchange with Elise:

“First I stole the money, then I lost it.”
She said laughingly, “Where?”
“In the market.”
“But where? Where does it go when you lose it?”

Towards the end of the book, Packer comes across a film crew and hundreds of people lying naked in the street. This is one of my favourite parts of the novel, including the exchange:

Packer is drawn away from his world of abstractions to a world of fleshiness, but this moment of connection is staged and ends on the word “cut”. The reason for the presence of these people in the street is a film; again, life is mediated through technology, yet it’s one of the most real and beautiful experiences he’s had. After the staged event he seems to finally make a connection with another human being, but this moment slips away.
I would love to know why the Cronenberg film version doesn’t include this scene. In the novel there is finally some warmth, and we empathise with the protagonist, but Cronenberg holds that back. Instead, in his offer of flesh, Cronenberg gives us the scene where Packer shoots himself through the hand (prefigured in an earlier scene: “Show me what it feels like. I’m looking for more. Show me something I don’t know. Stun me to my DNA.”) – a kind of reawakening through self-destruction/self-harm reminiscent of Fight Club, but with a radically different tone.

I was sucked in by the rhythm of Cosmopolis, by the wonderful prose, and the interesting way of approaching the issue of capitalism, when most narratives would be out on the streets with the protesters. There is a Palahniukian feel to the book and film, but Chuck, I would argue, is first and foremost an entertainer (having seen him at the Edinburgh International Book Festival, I can truly vouch for that), whereas, Cosmopolis is pared down and difficult. Not necessarily intellectually difficult, but simply difficult to like. Cosmopolis doesn’t aim to entertain, but it’s a delicious read.